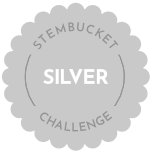 In this experiment, we make a rocket from a paper cup that is decorated with origami paper to form a rocket with a rubber band at the bottom. The way to play it is to press the rocket down on the other paper cup and when it is released the rocket will be thrown like launching. In this experiment we take advantage of the elasticity of rubber bands to propel an object. Elasticity is the ability of the rubber to return to its original shape.

In this experiment, we study the simple science of elasticity, elastic potential energy, kinetic energy, and changes in energy. The stronger we press the rocket down, the higher the rocket is launched, and vice versa. We also learn that the technology used in this experiment is the elasticity. We can also find tools around us that use elasticity technology such as car suspension, bows, spring scales, spring beds, trampolines, and pens. We also teach engineering which involves students assembling parts of the rocket and attaching the rubber. We also learn simple mathematics in the form of geometric shapes. We use geometric shapes to decorate the rocket.

In doing this experiment the children will be very happy because they can freely explore decorating the rocket according to their imagination. They can also role play as an astronaut while doing this experiment. The rocket is designed very simply so that it is easy for children to assemble themselves, which will encourage pride in their work. Children are also free to play it or experiment many times to answer their curiosities, such as what is the approximate maximum height that can be reached by the rocket, how to make the rocket fly even higher by pressing deeper, or when the rubber will break when pressed. And of course, it will be more fun when played with friends, they can compete to see whose rocket has launched the furthest.