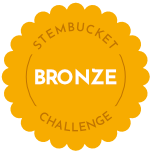 Muong Language is a group of dialects spoken by the Muong people of Vietnam, primarily spoken in mountainous regions of the northern Vietnamese provinces including Hoa Binh Province. Aligning with Vietnamese Ministry of Education and Training (MOET)’s 2018 national curriculum, Minority Language Education aims at developing students’ competence of local minority languages as well as promoting various ethnic cultures across the country. For this reason, Muong language is a mandatory language subject in Hoa Binh. This 45-minute lesson was conducted with Grade 7 students at the Green Playground in Nguyen Tat Thanh School. The lesson focused on Muong female costumes, with their typical colours and traditional features.

The lesson featured a sequence of 4 major activities. The first one titled ‘We are Muong people’ in 5 minutes, aiming at dividing students into 3 Muong groups: Muong Bi, Muong Vang and Muong Dong. The second 10-minute activity, Discovering Muong female costumes, helped students to recognise the spelling, pronunciation and meaning of the words. They could write down and speak the words about some common Muong Clothes for females. Next comes controlled practice when the students were asked to look at a picture of Muong women in traditional costumes and describe the costumes regarding the type of clothes and colour. Finally, each group followed instructions in different points at the playground (representing the stream, bridge, Muong house, etc.) in the escape game to collect materials so that they could design and create the Muong clothing items. Their final product was the presentation of their design in a poster, and they used the target language (vocab and sentence patterns) to describe the clothing items in their poster.

By the end of the lesson, students were able to gain an insight into the Muong ethnic language and culture. Specifically, they could understand the Muong language of the given theme and could use the language to describe the costumes. One more follow-up activity as homework is that students were asked to design a Muong clothing item for their female family members. They would bring their design to the next class for a gallery walk and presentation.

The students successfully collaborated with each other in a series of playful gamified activities at the Green Playground and co-designed the clothing items, using frugal resources. Finally, they could present their product with confidence and great joy.

The teachers took advantage of the school’s available facilities to organize lessons for the students as well as using easy-to-find and low-cost/no-cost materials for students to design costumes.
Back